Scorpion (Latin: scorpio) is the ancient Roman name for a ballista-type throwing machine.

There are no technical descriptions of throwing weapons related directly to scorpions. Information about them mainly concerns their tactical use, on the basis of which conclusions are drawn about their device. In addition, in the 4th century, the Greek-speaking author Ammianus Marcellinus called the scorpion a completely different weapon — onager.

2-Boom slot and boom in the guide bar

4’ - Lever in the loaded machine position

5’ - Bowstring in the loaded machine position

6 – The barrel of the gun, in which a groove is cut in the form of a "dovetail"; a bar with a key of the corresponding shape moves in the groove

7 – toothed slats located on the gun bed on the right and left, with which the latch of the guide bar engages when the latter returns to its original position using a rope (9), the rope is tied to a double prong (8)fitted on a bowstring

9 – Rope wound on the gate shaft (10), when the tension levers (4) are brought to the tension position by pulling the bowstring (5)

11 – Trigger mechanism that lifts the latch associated with the teeth in such a way that the bar held by them is released, the guide bar receives a translational movement and the arrow flies in the direction of the target 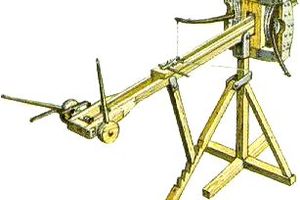 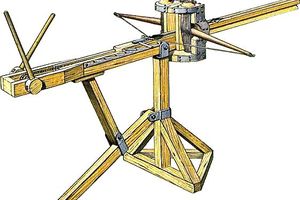 The first mention of scorpions dates back to the 3rd century BC, and the opponents of Rome were armed with them. Polybius, when describing the Roman siege of Syracuse, briefly defined the scorpion as "a small catapult that shoots iron darts." However, the word catapult denoted a broad class of throwing weapons, and from this definition it is not clear whether scorpions were 2-shoulder torsion-action machines, like a catapult in the narrow sense of the word, or just heavy crossbows, that is, mechanized bows. However, the 4th-century author Vegetius distinguishes scorpions from crossbows, although his definition of a scorpion makes little clear: "Scorpions were what we now call hand-held ballistae; they were so named because they cause death with small and thin arrows."

By the 4th century, catapults were already universally referred to as ballistae. The author of the 1st century BC Vitruvius, describing the device of the catapult, mentions scorpions. From the context, it is clear that the mechanism of throwing an arrow in a scorpion is based on the same principles as in a catapult. Vitruvius also noticed that the scorpion is turned by one person, that is, the scorpion was an easel machine. 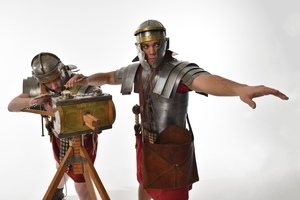