Peplos, peplon or peplum (other Greek: πέπλος, πέπλον, Lat. peplum, literally "cover" — - ancient Greek women's outerwear made of thin fabric, without sleeves, worn over a tunic. Peplum is longer than the chiton, with a large number of folds; the right side is not sewn, in turn, the unstitched edges of the fabric are trimmed with a border.

Roman women wore peplos until the 2nd century BC, when it was replaced by the fashionable palla , a female garment shaped like a square or rectangular blanket, sometimes decorated with embroidery. Similar clothing was worn by the Celts, but from fabrics of different weaving and colors. 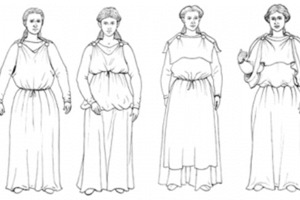 Peplos from the ancient Greeks

In Homer, the word peplos refers to a long, ground-reaching garment that was worn over the naked body and left one side open. The hands also remained open, which is why Greek women were called "white-handed" (Greek: λευκώλενοι). Peplos fabric was usually of bright colors: saffron, bright red, and mixed colors are mentioned (Greek: ποικίλος πέπλος, "variegated peplos"); peplos were often decorated with embroidery. The necessary accessory of the peplos was a belt (Greek :ννη).

The removed peplos served as bedding for the seats and chariots; the purple peplos was wrapped around the golden urn containing Hector's ashes. In the post-Homeric era, peplos continued to exist, but was decorated with oriental luxury, against which there were sometimes protests from legislators. A radical change in fashion occurred, according to Herodotus, in the middle of the VI century BC, when Ionian styles came into use. The evidence of Herodotus is confirmed by the ceramics found: on vases with black figures (archaic style) peplos — ordinary clothes, on vases from the transitional era (mid-VI century BC). e.) archaic clothing is found in conjunction with Ionian clothing; on vases with red figures, archaic peplos is no longer found.

In the new era (from the fifth century BC), the word peplos lost its original meaning and began to mean clothing in general; only when referring to the clothing of heroes, gods and singers on the stage, as well as the goddess Athena, the archaic meaning of the word remained. The peplos of the goddess Athena was annually carried in a solemn procession through the city to the temple of the goddess during the Panathenas; like a sail, it was attached to the masts of the sacred ship and displayed to all the people. Under the guidance of priestesses of the goddess, special weavers worked on its production, and for a whole year they decorated their clothes with a patterned pattern depicting the battle of the gods with giants, in which Athena herself participated. 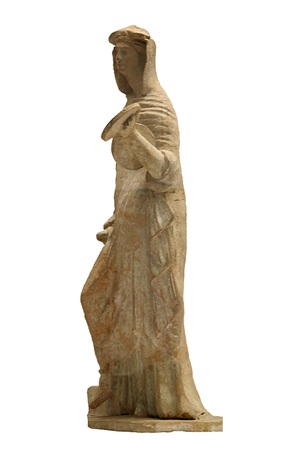 Terracotta figurine of a Greek woman in Peplos. 6th-5th century BC

Peplos from the Celts

In antiquity, clothing like peplos was common among all the peoples of Europe. The Celts, who lived in a more severe climate, sewed peplos only from wool, coarser and warmer. The actual Celtic name of this type of clothing has not been preserved, however, a dress was found that corresponds to the design of the Greek peplos-this dress is from Huldremose, Denmark (Huldremose). Its length is 168 cm, and its width (half-girth) is 132 cm. The Huldremos dress was woven in the form of a tube that wrapped around the woman's body and was pinned at the shoulders with two fibulas. Excess wide fabric gathered on the chest, forming a kind of neck that does not put pressure on the neck, and also hung down on the sides, without restricting the movement of the hands. 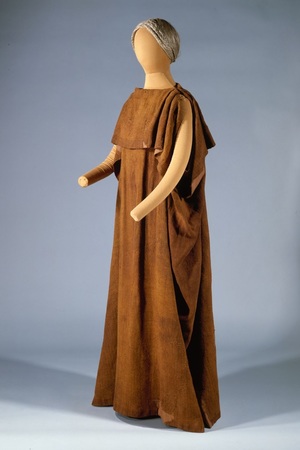 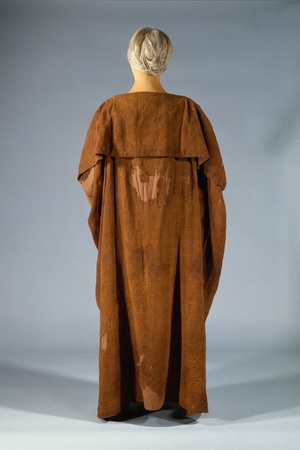 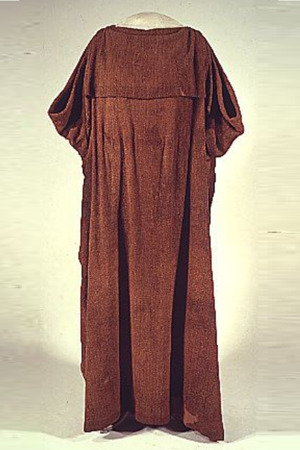