The Punians, Carthaginians, or Western Phoenicians were a group of peoples in the Western Mediterranean who traced their origins to the Phoenicians who migrated to North Africa and founded the colonies of Utica, Carthage, Leptis Magna, and others in the 12th and 7th centuries BC. In modern scholarship, the term "Punic "is the Latin equivalent of the Greek derivative term" Phoenician " – used exclusively to refer to the Phoenicians in the western Mediterranean, following the line of the Greek East and Latin West.

These included mainly the inhabitants of ancient Carthage (modern Tunisia), as well as those Phoenician colonists who recognized Carthaginian leadership in other parts of North Africa, western Sicily, southern Sardinia, Malta, Ibiza, and southern Spain. Their language, Punic, was a dialect of Phoenician. 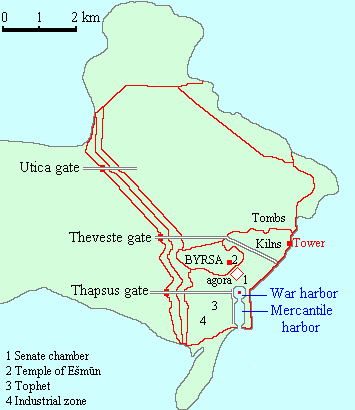 Layout of Ancient Carthage before the 3rd Punic War

The first Phoenicians settled in the western Mediterranean in the 12th century BC and became part of the trade networks associated with Tyre and Sidon in Phoenicia. Although ties to Phoenicia persisted throughout their history, they also developed close relationships with other peoples of the Western Mediterranean and developed distinct cultural traits distinct from their ancient Phoenician homeland. Some of these were common to all Western Phoenicians, while others were restricted to individual regions within the Punic sphere.

The Western Phoenicians were organized into many self-governing city-states. Carthage became the largest and most powerful of these city-states by the fifth century BC and gained increasingly close control over Punic Sicily and Sardinia in the fourth century BC, but other communities remained out of their control. During the Punic Wars (264-146 BC), the Romans challenged Carthaginian hegemony in the western Mediterranean, culminating in the destruction of Carthage in 146 BC. Surprisingly, the Punic language and culture survived under Roman rule, surviving in some places until late antiquity.

In the 560s BC, the royal power in Tyre was abolished. All the Phoenician colonies became dependent on the Carthaginian Empire.

Carthage (date. 𐤒 𐤓 𐤕 𐤇 𐤃 𐤔 𐤕 , Qart -adadašt, Latin. Carthago is an ancient city (museum) located on the eastern shore of Lake Bahira in the territory of the modern state of Tunis, near the city of Tunis. Carthage was the most important commercial center of the ancient Mediterranean and one of the richest cities of antiquity.

The name Qart -adadašt (in Punic notation without vowels Qrt-ḥdšt) translates from the Phoenician language as "new city".

Throughout its history, Carthage was the capital of the Phoenician-founded state of Carthage, which dominated much of the southwestern Mediterranean during the first millennium BC. The Tyrian princess Alyssa or Dido is considered the founder of the city, although her historicity has been questioned. According to the records of Timaeus of Taormina, Dido was forced to leave her homeland, arriving on the shore of the modern Gulf of Tunis, she decided to buy land from local tribes for the foundation of the city. She was only allowed to buy as much land as a single bullskin would cover. Then Dido took and cut the bull's hide into thin straps, surrounded them with a steep coastal hill, where she built a fortress that became known as Birsa. It is from this fortress that Carthage begins its history. As it developed, it established an empire and laid claim to power in the region, which was the only existential threat to Rome until the arrival of the vandals several centuries later.

Carthage is located on the African coast of the Mediterranean Sea about ten kilometers east of the modern city of Tunis in northern Tunisia. The city is located on a peninsula bordered by the Gulf of Tunis to the east, Sebhet Ariana Lagoon to the north, and Lake Tunis to the south. Carthage was located on the most important Phoenician trade route between the Levant and Gibraltar. Its location on the Strait of Sicily allowed it to control maritime trade in the Mediterranean. This was the main reason for the city's economic and military dominance. At the same time, there was a link between Sicily and the Tyrrhenian Sea and the northern Mediterranean. Two large artificial harbors were built in the city, one to house a huge fleet of 220 warships, and the other for commercial trade. A walled tower overlooked both harbors. The city had massive walls 23 miles (37 km) long, which was larger than the walls of comparable cities. Most of the walls were located on the shore and therefore could be less impressive, since Carthaginian control of the sea made it difficult to attack from this direction. For about 3 miles (4.8 km), the walls on the isthmus to the west were really massive and were never breached. The location was strategically advantageous, as it made it easy to defend the city from land. To the north of the actual urban development, but still within the city walls, in ancient times was the agricultural area of Megara. 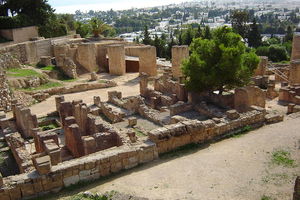 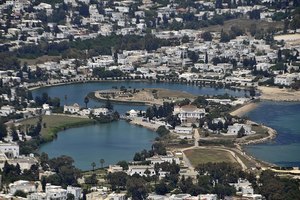 Remains of the Carthaginian shipyards 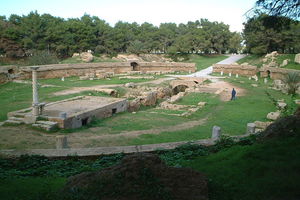 Ruins of the Carthaginian Amphitheater

According to legend, Queen Dido, who fled to these places from Tyre after her brother King Pygmalion killed her husband Sychaeus, decided to buy land for the foundation of the city. She was allowed to buy as much land as a single bullskin could cover. The quick-witted queen cut the bull's hide into thin straps, tied them together, and marked her domain with the resulting long rope. It is no accident that the citadel that appeared in the center of Carthage was called Birsa, which means "skin". Carthage (Karthadasht) - literally means "new city". "New" Carthage was primarily in reference to the neighboring Utica (whose name, respectively, translates as "old city"), but some researchers understand the name as"new Tyre". The Carthaginians were Phoenician settlers originating from the Mediterranean coast of the Middle East. They spoke Canaanite languages, a Semitic language family, and followed the local variety of the ancient Canaanite religion. The Carthaginian Republic was one of the longest-lived and largest states of the ancient Mediterranean.

In 814 BC, Elissa committed suicide (according to legend-thus destroying the plans of the Berber leader of the Maxitan tribe Iarbant to marry her and get the city as a "dowry"), and an aristocratic republican system was established in Carthage. The highest authority in the city belonged to the Council of Ten (Asharat) - first consisting of Dido's companions, and then of their descendants. There were also people's assemblies (Ams), but almost nothing is known about their powers, which may indicate that their influence was insignificant. The commander of the army (rabimahanate) was appointed by Asharat, and it was he who represented Carthage in foreign relations. Unlike Rome, where the leading position was occupied by the Senate, where the best people were elected, in Carthage a more significant role was assigned to the people's assembly. But some scholars believe that the real power in the city was held by the oligarchs, a group of particularly wealthy individuals. Carthage, along with Rome, was considered the most cultured and developed city of that period. 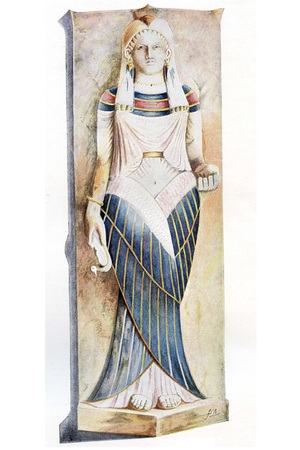 A Carthaginian priestess depicted on a sarcophagus. 3rd century BC

By the beginning of the third century BC, Carthage had become the largest state in the western Mediterranean. Its location between Sicily and the coast of present-day Tunisia allowed it to control ships that passed by. In those days, ships usually sailed in sight of the coast. In the first quarter of the seventh century BC, a new wave of settlers from Phoenicia arrived in Carthage. The city is growing rapidly, establishing trade links not only with the mother country and other Phoenician colonies, but also with Etruria and Greece, in particular with Corinth. In 663 BC. The Carthaginians also founded their first colony, Ebes, on the Pitiu Islands off the Spanish coast. The penetration of the Carthaginians to the far west of the Mediterranean Sea caused a conflict with Massalia, which considered these territories its own "patrimony". The Carthaginians were defeated and had to focus primarily on the development of the African coast. Thus, in the late 7th and early 6th centuries BC, Kerkouan was founded on the Bon Peninsula, and control over Hadrumet, Sabratha, and Leptis Magna was established.

The Carthaginian shekel, dated 237-227 BC, depicting the Punic god Melkart (equivalent to Hercules)

The Carthaginians were a warlike and businesslike people, and they dug two harbors (Coton) on the coast — one for military vessels, which held about 220 ships, and the other for trade. In addition, they built a fortress wall around the entire city, the total length of which was 37 km, and the height in some places reached 12 m. Carthage became impregnable from land and sea, where it was guarded by warships. The city itself was divided into 4 residential areas. For burials, he had a cemetery, for the worship of the gods — special places of worship, where sacrifices were made.

The Carthaginians sailed to various places and subjugated southern Spain, the lands of North Africa, the islands of Sicily, Sardinia, and Corsica. The Romans called the Carthaginians Punians. At first, the two states helped each other in the fighting, but soon there was friction over the possession of the island of Sicily, as well as influence in other lands and seas. 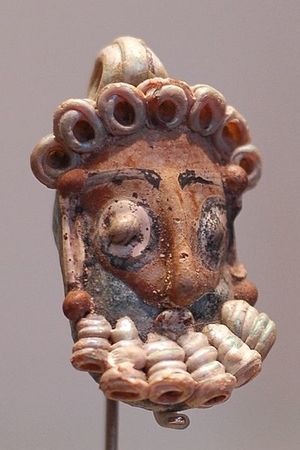 Glass head, Carthage. It is kept in the Louvre Museum. 3-4 century BC 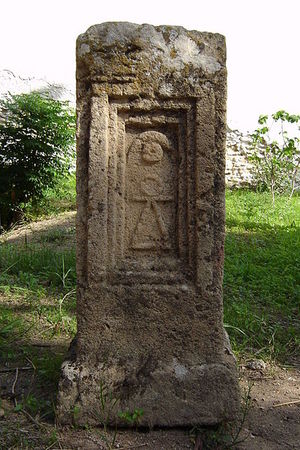 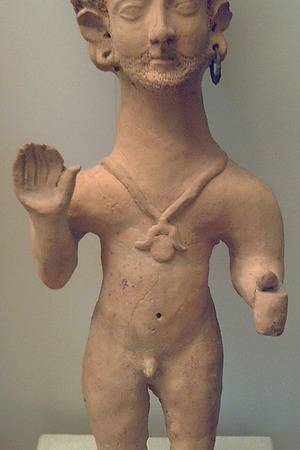 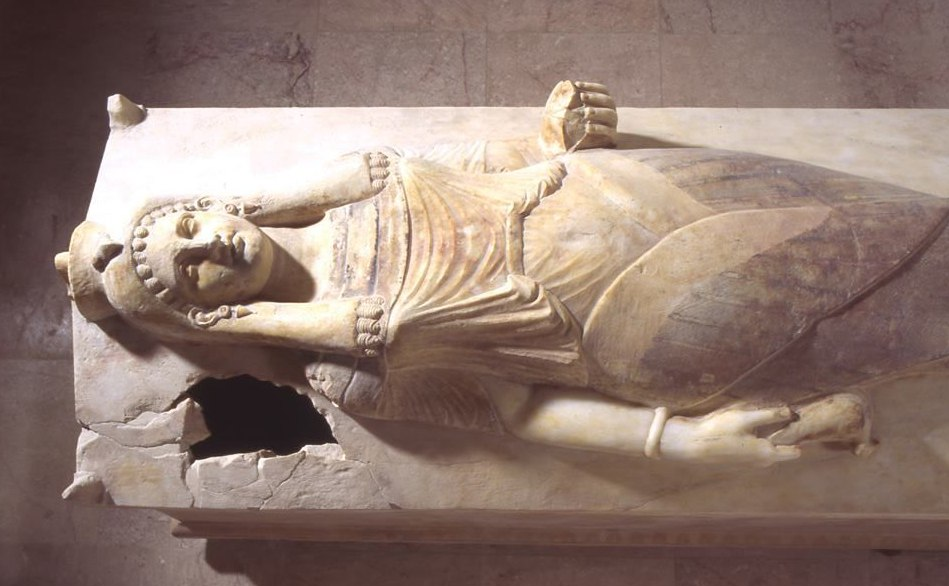 Image of a Carthaginian woman on a marble sarcophagus. The image could have belonged to a priestess, princess, or goddess. 3rd century BC