The Punic Wars are a series of wars (there were three in total), with interruptions, between Ancient Rome (Roman Republic) and Carthage (a former colony of Phoenicia in North Africa, which later became an independent state). Rome won, capturing the entire Western Mediterranean and destroying Carthage.

The Third Punic War (late 149-spring 146 BC) was the last of the Punic Wars that finally destroyed Carthage.

Punns or Punians (Latin punicus) is the Latin name of the Phoenicians who lived in North Africa, primarily the inhabitants of Carthage (a former Phoenician colony). They were also so called because they sold shellfish, which was processed to produce a purple color.

Alignment of forces before the war

Reasons Third Punic War on the part of Carthage-thirst for revenge. Restore its former power. Defend their independence from Rome. On the part of Rome: fear that Carthage will be able to restore its power, as well as the complete elimination of a major commercial competitor. 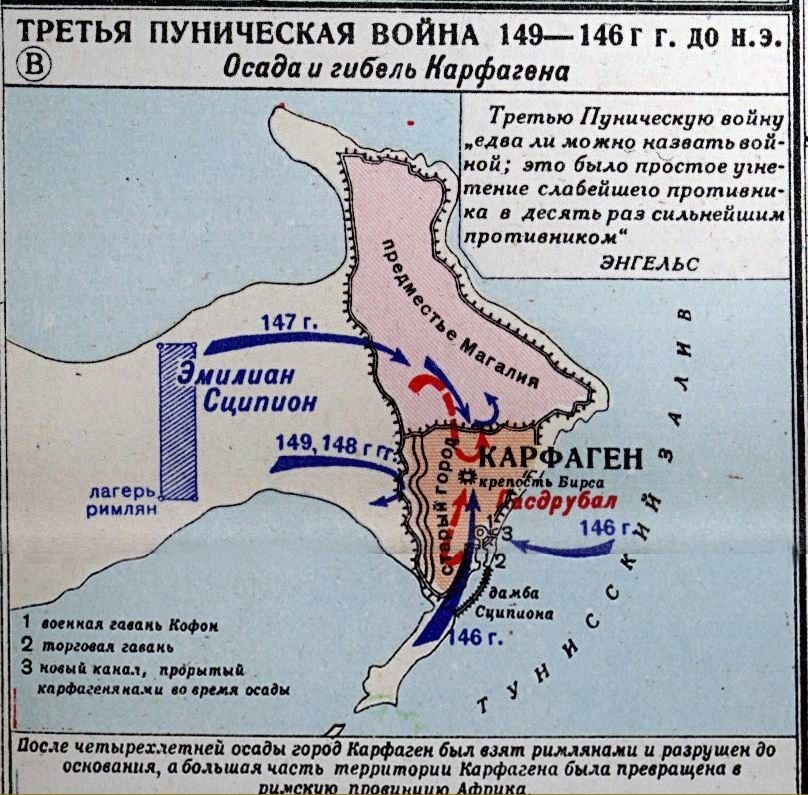 Map of the military campaign of the 3rd Punic War

Course of the war

The reason for the beginning of the 3rd Punic War was the armed response of Carthage to the oppression that the king of Numidia and an ally of the Romans, Masinissa, arranged for him. Complaints about his actions to Rome did not lead to anything, and Carthage began military operations with him, which Rome immediately took advantage of to start a new war.

In 149 BC, a Roman army landed in Africa under the Consuls Manius Manilius and Lucius Marcius Censorinus. The Carthaginians, not wanting war, tried to negotiate peace with the consuls, but they deceived them and eventually began armed resistance to the Roman troops. They were led by Hasdrubal Boetarch. The Romans surrounded the city and laid siege to it. In the beginning, the Romans wanted to take the city by storm, but after failing, they moved to a siege.

In 147 BC, the new commander of the Roman forces, Consul Publius Cornelius Scipio Aemilianus, son of Aemilius Paulus, adopted by Scipio Africanus, arrived in Africa from Rome. He took up the siege more vigorously and competently than his predecessors.

As a result, in the spring of 146 BC, the Romans were able to capture Gordo, except for Birsa (a fortified fortress in the center of the city). For a long time after that, there were street battles, but in the end, on the 7th day of fighting, the defenders of Birsa surrendered, except for Hasdrubal and the Roman defectors who locked themselves in one of the temples, in which they died, not wanting to be captured by the Romans, all except Hasdrubal who surrendered. The remaining captive inhabitants of Carthage were sold into slavery. As a result, the Romans sacked the city and destroyed it, walking with a plow over the place where it stood, and sprinkled salt on the ground in the city. Under pain of a curse, it was forbidden to rebuild the city on this site.

The territories of the former Carthage became a Roman province, with its capital in the city of Utica (a city northwest of Carthage, located at the mouth of the Bagrad River (now the Medjerda River in Tunisia and partly in Algeria) on a promontory jutting out to sea). Thus ended the 3rd Punic War. 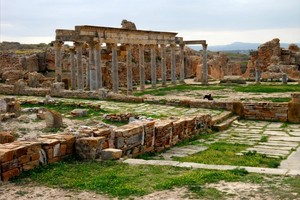 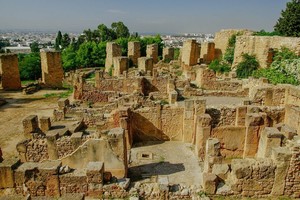 2. Titus Livy. Roman history from the founding of the city

3. Bagnall, Nigel. The Punic Wars: Rome, Carthage and the Struggle for the Mediterranean. — London : Pimlico, 1999

6. Delbrueck H. The history of military art in the framework of political history. — Translated from German-Vol. 1 "The Ancient world". - Moscow, 1936.

12. Shifman I. S. Vozrozhdenie karfagenskoi derzhavy [The Emergence of the Carthaginian Power].

13. Elnitsky L. A. The emergence and development of slavery in Rome in the VIII-III centuries BC-Moscow, 1964.