Xiphos (other Greek :φφος) is a straight, double-edged sword about 60 cm long. The tip is pronounced, the blade is leaf-shaped. Xiphos was mainly used by Hoplites as an auxiliary weapon if the spear broke or the enemy got too close. Most often xiphos was used by Greek and Etruscan phalangites, less often by Macedonian ones. Later, the sword spread among various barbarian tribes in the Apennines.

It is believed that xiphos comes from bronze swords of the late Mycenaean period. Bronze swords of this period had a thin double-edged blade about 80 cm long. After the beginning of the use of iron in the production of swords in the 9th-6th century BC (the Etruscans continued to make bronze weapons longer), the blade began to be made wider and shorter. The handle was made of bronze. The scabbard was made of wood with copper overlays.

Xiphos was mostly a stabbing weapon. They tried to hit the enemy in the face, throat or upper chest. In the 6th century, the single-edged kopis began to spread among the Hellenic armies , which slightly pushed xiphos out of the Hoplite armament. 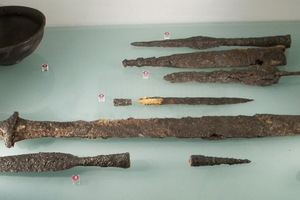