Kopis (other Greek: κοπίς) - a type of cold weapon with a blade on the inside of the blade, designed primarily for chopping blows. In Greek, κόπτω means "to chop, to cut off". Copis were mostly used by Hoplites as an auxiliary weapon if the spear broke or the enemy got too close.

Swords of similar design were used by different peoples at different times, and differed mainly only in the name and length of the blade. The first weapon of this type is considered to be the ancient Egyptian khopesh with a curved blade, derived from a sickle. The khopesh could have both external and internal, and sometimes double sharpening, and most importantly-it had a rather long (50-60 cm) handle, that is, it was rather a shortened halberd. But the kopis was sharpened from the inside and had a saber-type handle. Most likely, this weapon appeared in Sumer and later got to Hellas through the Medes. It is most widespread in Iberia.

Euripides and Plutarch used the word for a carving knife. Xenophon called so the swords of the Persians and Egyptians. The ancient Roman author Curtius, in his novel about the campaign of Alexander the Great, once mentions kopis in the battle with the Indians: "Slightly curved swords, similar to sickles, were called kopids, they cut down the trunks of elephants.".

Kopis was most likely borrowed by the Greeks from the Persians in the 6th century BC. Herodotus mentions such weapons in the Persian heavy cavalry. The length of the blades of archaeological finds in Greece varies from 53 to 70 cm. On some instances, the butt of the blade is straight, such kopis resemble a classic machete.

Kopis was worn on the left side in a wooden, leather-covered scabbard, suspended from the shoulder belt.

Another word for the same curved sword is mahaira (mahera) (other Greek: μάχαιρα), which means knife in modern Greek. This word in antiquity was widely used to refer to all sorts of cutting objects, and not just the fighting swords of the Greeks. Xenophon uses "kopis" and "mahaira" in relation to the same type of sword, but it is clear from the context of his writings that by "mahaira" he meant a cutting, not a piercing type of blade, and by "kopis" - a curved sword:

"We prefer a curved saber (μάχαιραν) to a straight sword (ξίφος) for harming an opponent, because for a rider from a high position, a saber strike (κοπίς) is more convenient than a sword strike.".

Thus, mahaira is a broader concept than kopis. In the 10th-century East Roman version, the word "machaira" simply means a sword, referring to the text of the ancient Greek historian Polybius, who referred to Celteberian double-edged swords and native Roman swords by the word machaira. In earlier texts, the Greeks called swords xiphos (other Greek :φφος). 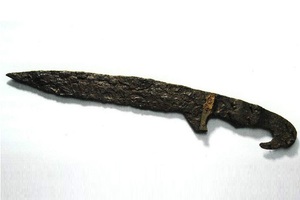 Kopis. Found on the Halkidiki peninsula in Greece. 4th century BC 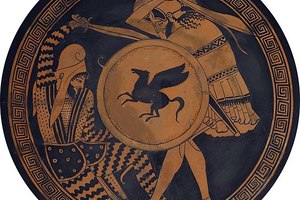 A Greek hoplite fighting a Persian archer warrior. Both are armed with kopis. National Archaeological Museum, Athens. Drawing from an ancient kilika (vase). 5th century BC

The name falcata is not historical — it originated in the second half of the 19th century due to the liberties of one of the translators from Latin, who took the figurative descriptive expression "ensis falcatus" — "a sword curved like a sickle" for the name of a type of weapon. The Romans themselves called this weapon the" Spanish saber " — machaera Hispana.

According to legend, Iberian gunsmiths in the 3rd century BC tested the quality of steel in such a way: the sword was placed flat on its head and bent so that both ends touched the shoulders. When released, the sword should straighten without consequences. even though the gunsmiths repeated this trick many times, a good sword always regained its shape.

Early examples of falcata of the 5th-4th centuries BC reproduce Greek kopis with a handle in the shape of a bird's head or an animal. Later, the artistic excesses of the Greeks passed into a more functional, palm-friendly configuration, and the blade acquired its final shape.

The blade of the kopis (or falcata) expands towards the tip, causing the center of gravity to shift away from the hand. As a result, the kinetic energy of the impact increases, and thanks to the forward-curved blade, the chopping ability increases significantly compared to a straight sword. According to the Romans, no helmet or carapace could withstand the impact of a falcata.

Falcata with the remains of a scabbard. A museum in Madrid. 3rd century BC 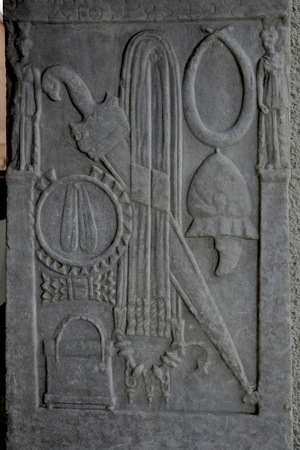 Bas-relief. Kopis in its scabbard. Archaeological Museum, Istanbul. Second half of the 3rd century BC