The Consul is the highest elected magistracy in Republican Rome.

The exact meaning and origin of this term is unknown, which causes controversy among modern researchers. In antiquity, one can find such meanings as" caring "for the motherland, citizens, the state, or" questioning "the people and the senate, and Modern historians have translated this word in different ways: Barthold Niebuhr-" being together", Theodor Mommsen — "dancing together", Ernst Herzog — "walking together", Wilhelm Soltau — "sitting together", that is, comrades (collegae).

Initially, consuls were chosen only from the patricians. However, the struggle of the Plebeians with the Patricians made a correction in this tradition and from 367 BC one of the consuls was elected from the Plebeians, the first such person was Lucius Sextius.

From 222 to 153 BC, consuls took office on the Ides of March, which fell on March 15. Later, the consular year began to start on January 1. 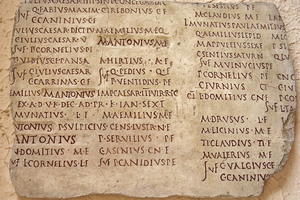 A list of Roman consuls known as the fasti Colotiani. A plaster cast. The original: 12 BC-14 AD, Rome, Museum of Roman Culture.

The consuls had both military and civil powers. As military officials, they were the commanders-in-chief of the Roman army, recruited legions, appointed part of the military tribunes (the other part was chosen in the tribunate comitia), and directed military operations. Civil power consisted in the authority to convene the Senate and people's assemblies, preside over them, propose bills, and direct the election of officials. The consuls were the main executors of the decisions of the Senate and the people, took care of internal security, managed some festivals and other issues of peaceful life.

Since the consuls ' official powers were the same, each of them had the right to protest against the actions of the other. Nevertheless, the consuls had to act together in all important civil matters. The issue of issuing acts that required sole leadership (for example, the chairmanship of committees) was decided by drawing lots or by agreement of the parties. During military operations, one consul went to command the army, while the other remained in the city. In cases where the war required the presence of both consuls on the field of battle, the areas of military operations were distributed between them by lot, agreement, or at the discretion of the Senate. When the consular forces worked together, and both consuls were present, they commanded alternately, changing every day.

Consuls had their own insignia: a toga with a wide purple border, a curule chair (Latin: Sella curulis) inlaid with ivory, and an escort of 12 lictors with fascia, in which axes were embedded outside the city limits. 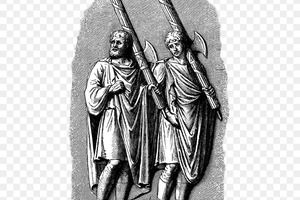 Image of lictors with fascia from the column of Marcus Aurelius, II-th century AD, Rome.

In cases of extreme external or internal danger, a dictator was appointed in Rome by decision of the Senate . At the same time, the Senate had the right to make only one fundamental decision: whether a dictator was needed at all at a given time or not, and the appointment itself was carried out by one of the consuls. The Senate, as a rule, indicated the person whom it wished to see as dictator, and the consul usually took into account this desire.

In the Roman system of chronology, years were designated by the names of the consuls of a given year (they were called Lat. CONSULES ORDINARII).

Under the laws of the Republic, the minimum age for a consul was 41 (for a patrician) and 42 (for a Plebeian). But exceptions were allowed: Gnaeus Pompey the Great became consul for the first time at the age of 27, and Octavian at the age of 19.

At the end of the term of office, the consuls received a province and the title of proconsul.

During the imperial era, consuls lost their real state power: their position became an honorary title, since the consular powers were now transferred to the emperor and, thus, the magistracy became appointable.