The Roman circus (Latin Circus) appeared as a result of the development of Hellenistic hippodromes and was intended for competitions in chariot racing (Brunov N. I. Essays on the history of architecture, p. 291). Circus Maximus was built in the valley between the Aventine and Palatine on an area of about 600x150 m. In the time of Romulus, this valley was home to an altar to the god Consus, the patron saint of agriculture, in whose honor a festival with horse races was held. At that time, the hillsides served as a natural amphitheater, where the audience was located.

The first wooden buildings related to the circus (stalls), according to Titus Livy, appeared here around 329 BC. e. At this time, there were still sanctuaries and altars of the patron gods of agriculture in the valley, which were surrounded by a wooden fence during competitions. At the beginning of the 2nd century BC, the arena was divided in half by a longitudinal platform (spina), on which altars and chapels were raised and images of various deities were also placed (Sergeenko, M. E. Life of Ancient Rome, p. 256). Turning posts (metas) were placed at the ends of the back. In 174 BC, stone stalls were built. Under Julius Caesar, the circus was expanded in both directions and surrounded by a moat with water. Under Octavian Augustus, the circus was further improved: on the long sides and on one short, semicircular side, seats for spectators were arranged in three tiers; in the lower tier they were made of stone, in the other two - wooden. Around the circus was a one-story arcade, where various shops and workshops were located (Sergeenko, M. E. Life of ancient Rome, P. 256). The length of the circus is 3.5 stages ( 621 or 644 m), the width is 4 pletres (123 or 118 m), the moat around the arena is 10 feet wide and deep (about 3 m).

The circus, like the amphitheater, had no roof, and during bad weather, the canvas was stretched over the audience. By the end of the 1st century BC, the circus already had twelve stone stalls located opposite the semicircular side, behind the stalls on both sides towers were built that looked like a fortress wall, between the stalls there were gates, above which the place of the games organizer was located. There was another gate – a Triumphal one, for the winner. Inside, the circus was lined with marble. The building was badly damaged in a fire in ' 64, but was soon rebuilt. 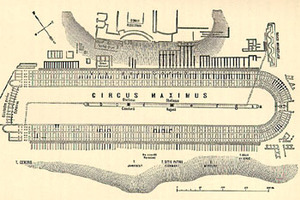 Building plan of the Circus Maximus in Rome 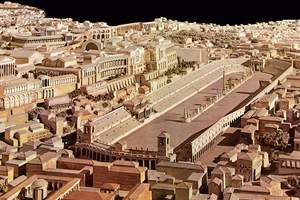 Reconstruction of the Circus Maximus in Rome 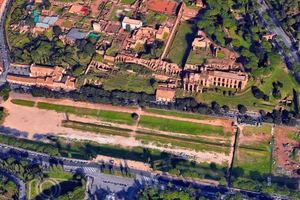 1. Brunov N. I. Essays on the history of architecture in 2 volumes. Moscow: Tsentrpoligraf, 2003

2. The Life of Ancient Rome-Sergeenko. pdf