Trireme (triremis). Without exaggeration, the trireme was the most massive warship of antiquity. With its size, it had impressive combat power. The main weapon of the ship was a rostrum-ram in the bow. However, in some bas-reliefs, you can see triremes with superstructures, on which various types of throwing machines were located .

The exact dimensions of the vessel are not known for certain. Bannikov and Morozov's book "The History of the Roman and Byzantine Navy" (p.75) gives several versions: the length of the ship's hull could vary from 35 to 40-42 meters, and the width – from 5.5 to 8 meters. The ship was also equipped with two masts. Under sail, it could reach speeds of up to 8 knots (approximately 14.8 km / h). On oars, this speed was reduced to 5 knots (almost 10 km / h).

The full crew of the trireme exceeded 200 people. At the same time, 170 of them are rowers of three tiers. The rowers were commanded by Hortator (Hortator remigium). He was responsible for the well-coordinated work of the rowers, asked rowing questions, supervised the discipline and distribution of food. In addition to the rowers, a small detachment of marines was stationed on the trireme, which was commanded by a centurion, as well as several sailors who were engaged in the ship's sail. 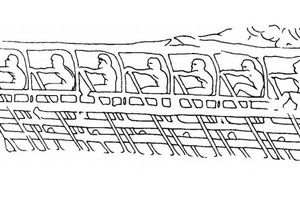 Bas-relief of Lenormand. Drawing by I. V. Kirsanov

General management of the ship was carried out by Trierarch – captain of the ship. He was assisted by a helmsman, the Romans called him the governor (gubernator). Another member of the crew – Prorat - was engaged in plotting the course and was responsible for the navigation of the ship, he was at the very bow of the ship.

In addition to the sailors, military and command staff, the ship had a certain number of specialists. For example, there was a carpenter (materiarius), a healer, a rope maker and a greaser of leather cuffs for oars (history of the fleet of Rome and Byzantium, p. 78). The lower tier of oars was covered with cuffs to prevent water from entering the ship. However, in the event of a ramming blow to the side, it was the rowers of the lower tiers who were the first to die. Appian describes how rowers of the lower tiers (thalamites) drown, while rowers of the upper tiers manage to escape (App., BC, V, 107).