Hoplon (other Greek :ππλον), or Argive shield — a round convex shield, which was the main protection of the Greek Hoplites, who got their name from the name of the shield. Despite the fact that this designation was widely used, the historically correct name of the shield is aspis (other Greek: ασπις) or aspida (ΑσπίΔα). The name "hoplon" is mistakenly used in many languages, but the Greeks distinguished between hoplon and aspis. It is assumed that this type of shield appeared in the 8th century BC, as evidenced by the surviving images on ceramics.

The size of the hoplon varied, its diameter was from 80 cm to 1 meter. It provided protection for the Hoplite from the chin to the knees.

Hoplon weighed from 6 to 15 kg. Because of its weight, the shield interfered with active offensive maneuvers, and also prevented the warrior from running. When fleeing, soldiers first got rid of the shield, so the loss of the shield was considered a disgrace and was severely punished (up to the death penalty). This did not apply to the loss of the helmet or armor, since they serve for personal protection, but the life of the entire phalanx depends on the shield . Due to its round shape and large size, the hoplon covered not only its owner, but also his associates. Fallen soldiers were also carried off the battlefield on shields. This is the origin of the famous phrase attributed to a certain Spartan woman who, while escorting her son to war, handed him a shield with the words:"With him or on him." 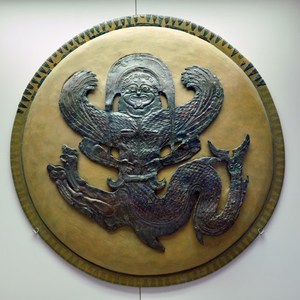 Hoplite shield from the museum in Olympia. The front surface of the shield is decorated with a bronze embossed overlay with the image of Phobos. 6th century BC 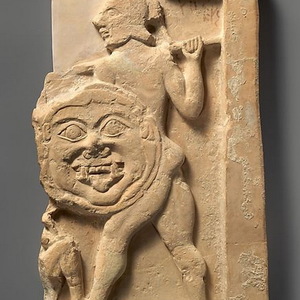 Terracotta relief depicting Achilles with a shield. Metropolitan Museum of Art, New York. Around 600 BC. 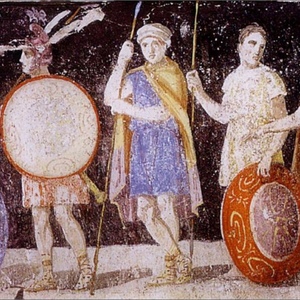 The base of the hoplon was made of solid wood and consisted of connected boards with a thickness of about 0.5 cm. The most common manufacturing option: the wooden base was covered with leather on the inside, and covered with bronze or iron on the outside. Sometimes the outer side was also covered with leather (usually bovine), and only the edge was made of metal. On the inner side, in the center, there was a wide bronze handle-porpax, where the hand was pushed up to the elbow. The warrior's hand was gripping the second hilt, located at the edge of the antelab shield. It was made from a cord or leather strap passed through two bronze loops. Often there were rings around the perimeter of the shield, through which a cord was passed, forming an antelope. On this cord, the shield could be thrown over the shoulder, for more comfortable movement on hikes. The hoplon was convex enough that the upper edge rested on the warrior's shoulder, making the shield easier to hold. 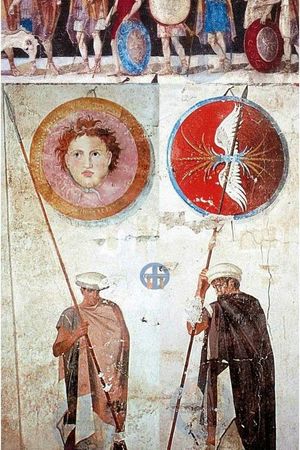