Helmets of the ancient Greeks

The history of helmet evolution in ancient Greece dates back to the Mycenaean civilization from the middle of the 2nd millennium BC. The earliest helmet finds, as well as their depictions in frescoes, date back to this time. In addition, there are written sources - Homer in the Iliad described the design of helmets of heroes of the Trojan War (about 1200 BC). Since then, the creation of various types of helmets begins. The earliest helmets found in ancient Greece after the Trojan War date back to the 9th century BC. In general, the helmets of those times are similar in shape to Assyrian helmets. From the 7th century BC, Hellenic artisans began to produce fully enclosed helmets, which in the 6th century BC acquired the most famous form to date, called Corinthian. Corinthian helmets became one of the symbols of Ancient Greece and a mandatory accessory of Hoplites on frescoes and ceramics. From the mid-5th century BC, Corinthian helmets were modified with the development of craft centers in Attica, Macedonia, southern Italy, and elsewhere. There are new, more open types of helmets (Boeotian, Chalcedonian). With the beginning of the conquests of Alexander the Great (330-ies BC), the battlefield was won primarily by mass armies, which needed more practical and unified helmets for arming. By the beginning of the expansion of Ancient Rome in the 2nd century BC, Thracian-type helmets were the most common, and since then the development of armor has been associated with the evolution of Roman weapons.

Greek helmets from the museum in Olympia. 7th-6th century BC

In ancient times, the Greeks called helmets a word that meant a hat made of dog skin — κυνέη (literally "dog"). In Homer's Iliad, the word κυνέη denotes both a cap and any helmet, leather or metal, but without a headpiece, plume and cheek pads. Homer calls the word κόρυς for copper helmets with cheek guards and horse-hair plumes. By origin, κόρυς is related to the word κέρας, "horn", and perhaps helmets were so called because of the presence of ornaments in the form of horns or plumes of a special shape.

Herodotus, describing the clothing and weapons of the Persian army, speaks of fox hats (helmets?) on the heads of Thracians. He also mentions the leather helmets of other tribes. So, even at the beginning of the 5th century BC, such helmets were not exotic. Caps made of felt, hides and leather were reinforced with iron plates, bones, fangs, wood or any other strong material that did not require special craft skills. Later, they began to bend bronze plates in the shape of the head, covering the lining of the same felt and leather. The helmets of the heroes of the Trojan War, created by non-Greeks, were very different from those that the Greeks painted on vases six centuries later, and consisted of four plates.

Due to the primitive design, the composite helmet has come down to our time from antiquity in just a couple of copies. The first all-metal helmets appeared in Greece in the 15th century BC. In the Museum of Heraklion in Crete, a partially preserved bronze helmet with elongated cheek pads and a pointed-up cupola with a pommel for attaching a horse's tail plume is presented.

After the Trojan War (at the turn of the 13th-12th centuries BC), there was a migration of peoples. In Hellas, the "dark" ages came, and the tribes of the Greeks lost even their writing, not to mention their craft skills. The first bronze helmets found in Hellas of the 1st millennium BC date back to the 8th century BC and reproduce the forms of Assyrian helmets with a rectangular cutout for the face, formed by wide triangular cheek pads, a pointed cumpole and a high pommel with an ornament in the form of a bronze arc. Conventionally, such helmets are called conical. After the disappearance of the pommel and smoothing the cap to a hemispherical shape, the appearance of the helmet approaches the Illyrian type. 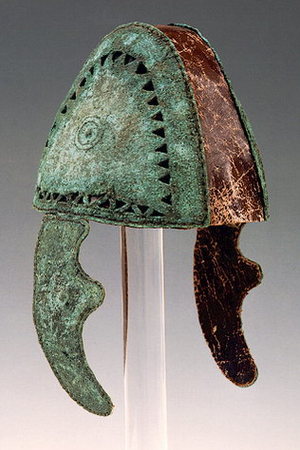 Helmet from a burial site in the Peloponnese (Greece). The leather part was added during the restoration. 11th century BC 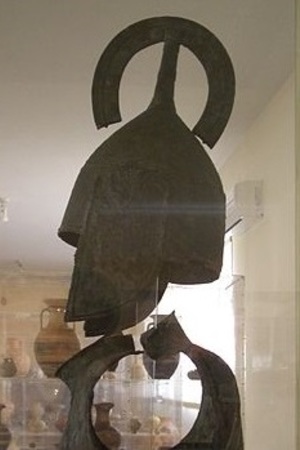 A conical helmet from the Archaeological Museum of Argos. 11th-8th century BC

Illyrian helmets — the first all-metal helmets produced in Ancient Greece after the "dark ages". The bronze sheets were bent to the shape of the head, overlapped and fastened with rivets at the points of contact, as a result of which longitudinal stiffeners were formed on the top of the head. Later, the Greeks learned to forge helmets from a single billet, traditionally preserving the longitudinal ribs. Helmets of this type are mostly found in the territory occupied by Illyria in ancient times, which gave the name to this type.

A characteristic feature of the helmet is the absence of a nanosheet, longitudinal ribs on the top of the head, large triangular"ears" -cheek pads and a rectangular cutout for the face. If you add a massive nanosheet, cover the neck with an elongated occipital part, give a curly shape to the"ears" -slaps and bend them around the face, then the helmet evolves into the category of Corinthian.

In the 7th century BC, Illyrian helmets fell out of use in Hellas, they were replaced by the development of handicraft production of Corinthian helmets. The Illyrian type was used until the 5th century BC in Macedonia, which was less technologically developed at that time. The period 725-650 BC dates back to 30 early conical helmets, the same number of Illyrian and 17 Corinthian. At a later time, in 650-575 BC, the conical helmets disappear, the number of Illyrian ones is reduced to 7, and the number of Corinthian ones reaches 90. 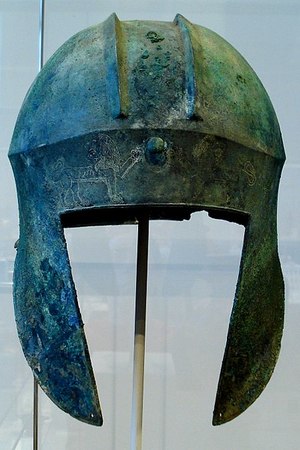 Frontal view of a bronze helmet of the Illyrian type with the image of lions. Argolis Museum. 6th-5th century BC 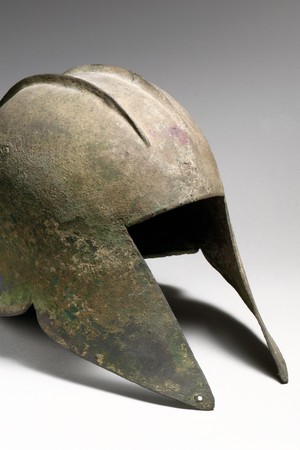 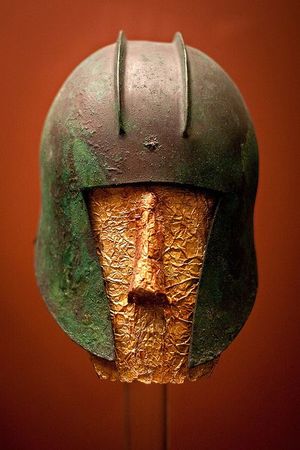 Corinthian helmets appeared in the 7th century BC. They gained the greatest popularity in the 5th century BC in the Greco-Persian wars. By the end of the fifth century BC, the Corinthian type is being replaced by the more comfortable Chalcedonian helmets. The Corinthian type was a fully enclosed helmet decorated with a horsehair comb. It gave full protection to the head, but the nanosheet and covered face limited the view. Outside of combat, the helmet was pushed back on the back of the head, revealing the face. The Corinthian helmet is an essential attribute a hoplite in 6th-century BC Greek pottery images, even if the warrior fights naked. The appearance of this helmet is associated with the development of combat tactics in a dense phalanx formation, where the warrior did not need a good view of the sides.

Usually the helmet is divided in the mouth area, but in the Greek polis of southern Italy (Apulia) they find solid helmets of the 6th-5th century BC, which resemble a bowler hat with holes for eyes and breathing of a characteristic T-shape, the nanosheet divides the "T" in two. This type of helmet is called the Apulo-Corinthian helmet. 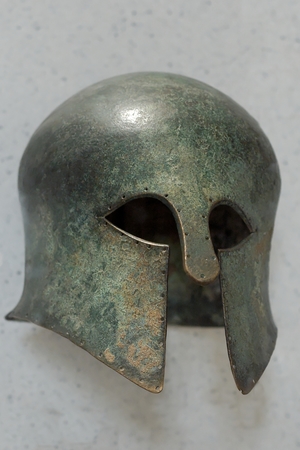 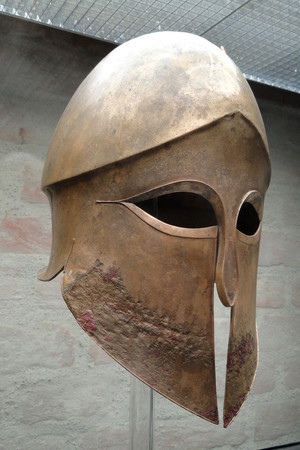 Corinthian helmet from the tomb of Denda. From a Greek workshop in Southern Italy. Located in Staatliche Antikensammlungen, Munich. 500-490 BC 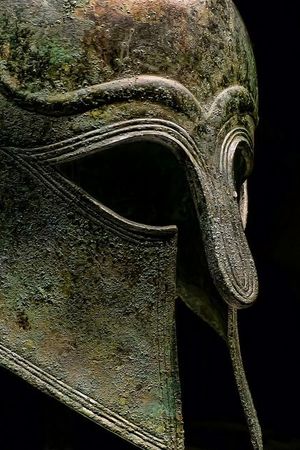 Chalcedonian helmets appeared in the 6th century BC and lasted for three centuries, until they were forced out of mass use by the simpler pylos and Thracian helmets in the 3rd century BC. The nanosheet of this helmet is symbolic or nonexistent, which increases the visibility. In the area of the ears, in contrast to the Corinthian helmet, a shaped cutout appears. This helmet is more comfortable, but it does not protect the wearer as much. The cheek pads are quite wide and flat, rectangular or rounded in shape, often the frontal edge of the cheek is wavy. The cheek pads can be attached on hinges. Visually, the helmet consists of two parts: the upper hemispherical dome and the lower part, connecting in the area of a prominent rim. 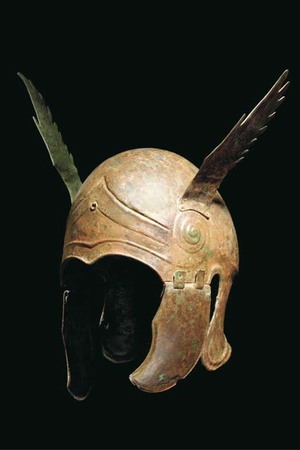 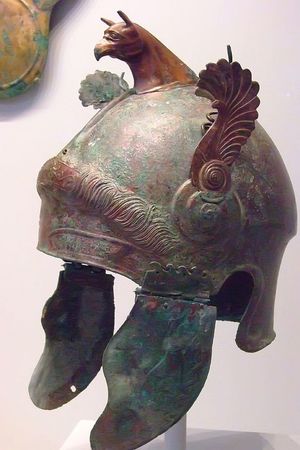 Ceremonial helmet Made in Southern Italy. Bronze. Shot at the Getty Villa in Malibu, California. 350-300 BC 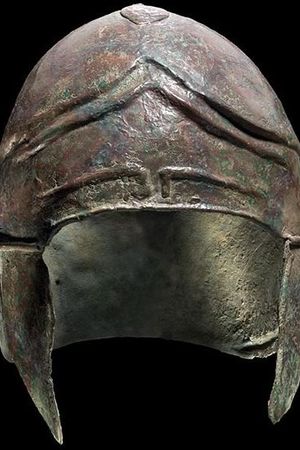 The Chalcedonian helmet. Private collection, from the auction Hermann Historica. 5-4 century BC

Attic helmets are a variation of the Chalcedonian helmet made by a craft school in Attica. Renowned author Peter Connolly classifies the Attic type as a type of Chalcidian that lacks a nanosheet. Other differences from Chalcedonian include the pointed moon-shaped shape of the cheek pads, which were usually attached on hinges. The Chalcedonian helmet was often decorated with plumes and feathers, while the Attic helmet sported an archaic Carian horse crest. 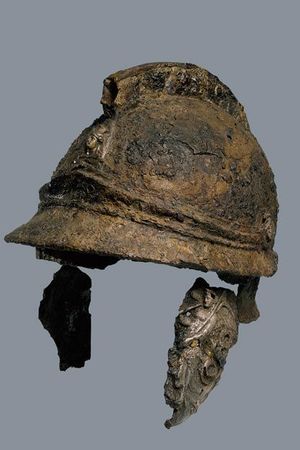 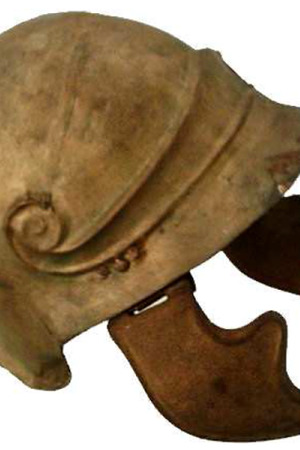 A helmet from the Harbor. This style of helmet was widespread in the Balkan lands in the V-III centuries BC. 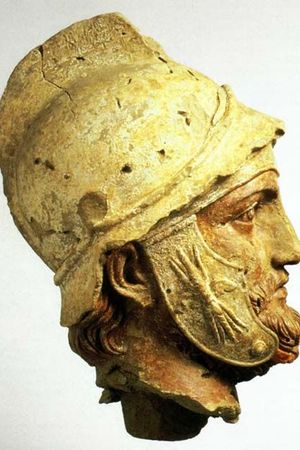 Terracotta head with an Attic helmet. Bactria. 4th-3rd century BC

Boeotian helmet-an open-type cavalry helmet, famous in the era of Alexander the Great. It probably appeared in Boeotia in the 5th century BC, then it was adopted in Thessaly. It is shaped like an ancient Greek peasant hat with a wide brim for protection from the sun. The ancient Greek author Xenophon recommended such a helmet for horsemen along with a curved sword of the kopis type. It was adopted by the Macedonian Hetaires, and was worn by the rulers of the Hellenistic states of Asia in the third century BC. It has a wide brim that protects against a sword strike from above and covers the neck. Comfortable for long-term wear in hot climates, does not limit the view. 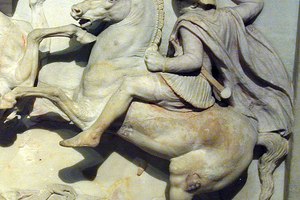 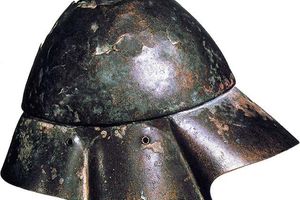 This bronze Boeotian helmet was found in the Tigris. Located in the Ashmolean Museum, Oxford. 4th-2nd century BC 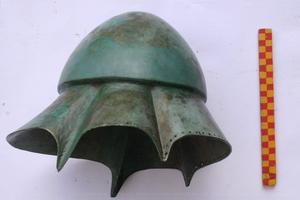 Helmet from the Ruse City Museum. Collection of Brat Bobokovi. 4th-2nd century BC

The Phrygian helmet reproduces the cap of the Scythians, Thracians, and other Eastern peoples. The elongated crown is bent forward with a drop. These helmets were worn by soldiers of the Macedonian phalanx. Later, they began to bend a metal crest on the top of the head, such helmets are called Thracian. In Macedonia, bronze Phrygian caps by the 2nd century BC were transformed into Thracian helmets, with an upturned crown and a simple low metal crest or plume of feathers. 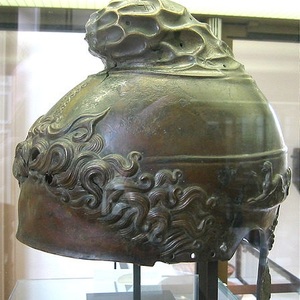 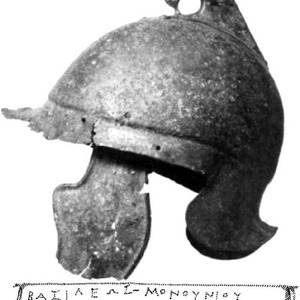 A helmet was found in Lake Ohrid with the inscription "King Mununi" written in Greek, apparently belonging to one of his soldiers of the Illyrian King Monuni. Around 300-280 BC. 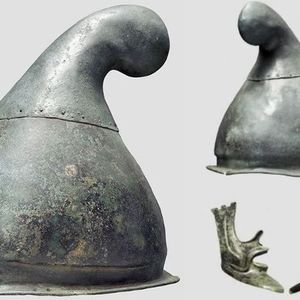 In the 2nd century BC, by the time of the Roman conquest of Ancient Greece, the Thracian helmet had become the most common in Greek armies. The crest becomes quite low, but a visor appears. The advantage was the convenience of such a helmet, good visibility and maneuverability, which protected better than solid armor, especially from heavy swords and iron pikes. The name of the helmet was given by the fact that during the Roman Empire gladiators from Thracians fought in it , for whom it also covered the face completely.

The transition to iron armor made us abandon the universal Thracian helmets. 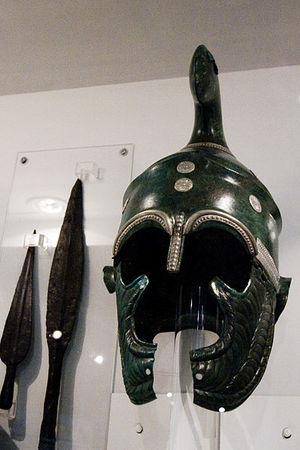 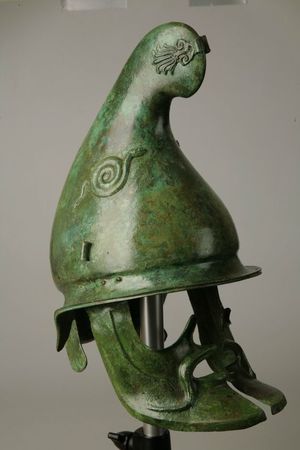 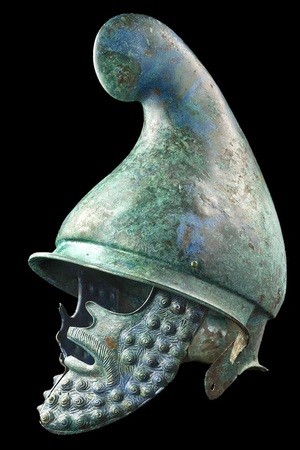 Pylos-helmet for lightly armed infantry. The main helmet of the Spartiates in the classical period, including during the Peloponnesian War. Technologically advanced in production. It is a conical rounded bronze cap. The first samples at the end of the 2nd millennium BC were collected from bronze flakes. All-metal pylons appeared by the 5th century BC. In the 3rd century BC, the Pylos were driven out of Hellas by the Attic helmets. 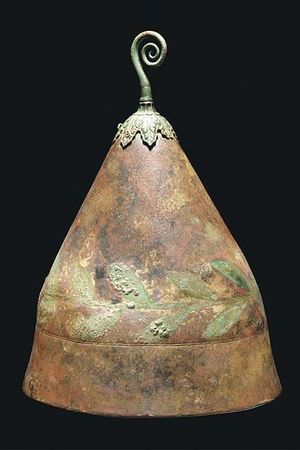 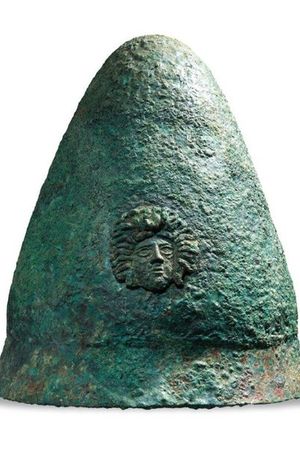 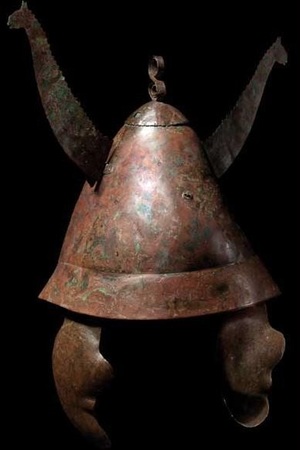 Pylos. Private collection, from the auction Hermann Historica. 4-3 century BC

Tsybulsky S. Voennoe delo u drevnevykh grekov [Military affairs among the ancient Greeks]. Ch. I Armament and composition of the Greek army. Warsaw, 1889. 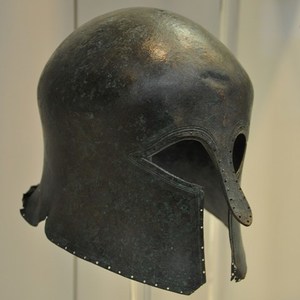 Helmet of the Corinthian type of the first half from the museum in Olympia. 6th century BC