Paegniarius (Latin: paegniarius) was an ancient Roman gladiator who entertained the audience in between fights while the main fighters fighting to the death rested. The name comes from the Greek word παίγνιον-toy, which in the context of gladiatorial fights meant "comic battle".

The Pegniarii were armed with fake weapons — only wooden gladiuses-ruduses and whips. The protective equipment consisted of wooden shield and wooden shields on the hands and feet instead of manikas and greaves. They wore baltei like other gladiators, but they could also wear tunics and even braki. It is also the only type of gladiator allowed to wear kaligs. They didn't use helmets, and at best just wrapped a cloth around their heads. Pegniarii performed mock duels without fatalities. Unlike real gladiators, they could have lived a long life: the famous epitaph to Pegniarius Secundus states that he lived 99 years, 8 months and 18 days. 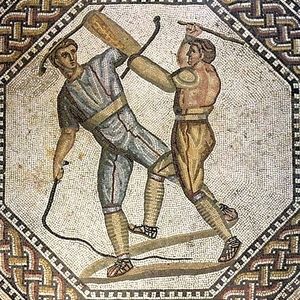