To date, we have a lot of information about the shoes of the ancient Greeks, and we can refer to written and visual sources. Shoes are depicted on ancient Greek ceramics and many statues, so we can appreciate the technical knowledge and skills of ancient artisans needed to create shoes. It is assumed that the main material for making shoes was leather, despite the fact that archaeologists have not found leather samples of Greek shoes, unlike Roman ones.

Greek footwear has changed a lot over time, and it needs to be considered depending on the periods. During the Archaic period, shoes were diverse in both shape and design. In the 6th century BC, the colonizers brought from Asia Minor soft cloth shoes with curved ends – ployaria. In the same period, closed shoes made of soft leather, tightened at the ankle with a belt in the Persian manner, appeared. It was called persikai. An analog of this shoe is the shoes of the ancient Etruscans. 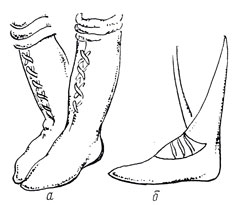 Persicai (a), Etruscan shoes (b)

The most common footwear of the ancient Greeks was sandals. Many Roman variations of this type of shoe were found, probably the Greeks had similar patterns in everyday life. Greek sandals did not interfere with the natural movements of the foot, had elastic soles, and were cut specifically for the right and left feet. The convenience of sandals was created by a special mutual arrangement of belts, one of which necessarily passed between the thumb and index finger and pressed against the foot, going out to the inner part of the sole. The side straps crisscrossed, strengthening the ankle joint. Starting from the 5th century BC, loops were made on sandals, the number of which reached nine. Through the loops ran the main belt that encircled the shin.

Some types of leather sandals were expensive, so residents with little income wore either simpler models or sandals with wooden soles. The soles of the rich men's sandals were made of several layers of bovine leather, and the top of the straps was painted in different colors and most likely cut out of goatskin. From the books of ancient authors it is known that the rich citizens of Athens Alcibiades and Iphicrates were trendsetters on sandals. 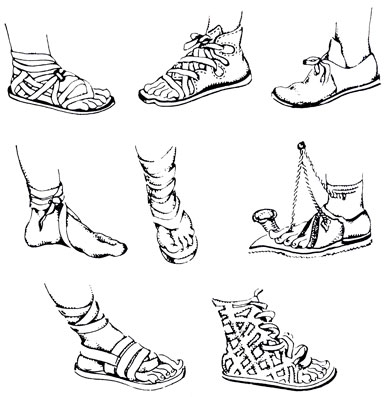 Shoes of the classic period are distinguished by high craftsmanship. Instead of loops in the leather, they began to make holes of different diameters and shapes, through which leather belts were stretched. Sandals appeared on the sole, the contour of which corresponded to the contour of the fingers. Shoes with such soles were later called lingila by the Romans. Until the 5th century BC, the Greeks often used knee-high shoes called embades. 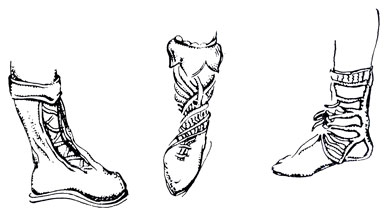 During the Hellenistic period, the Greeks mainly wore high leather shoes endromis when riding and during military campaigns. In such shoes, the surviving sculptures depict the mythological heroes Dionysus, Hercules, Perseus. 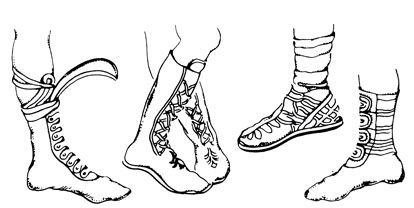 In the second half of the 5th century BC, laced shoes with an open toe, tied with leather laces, reached to the middle of the ankle in Greece. These are the so-called koturnas, which the Greeks wore only on stage. Later, high-soled boots appeared. At the end of the 5th century BC, a soft half-shoe with a raised toe, which was native to Asia Minor, became fashionable in Greece. The most common footwear for ordinary Greek youths was carbatines and boots.

Sandals in the Hellenistic period were decorated with various metal fittings. Men's sandals with a leather back and open toes were called crepes. They somewhat resembled Assyrian ones. In the crepes under the belts, rich people put a piece of leather - a kind of tongue. Shoes for special occasions were made of colored leather, decorated with ornaments, embroidery, inlay, pearls. Thick-soled shoes were highly valued. 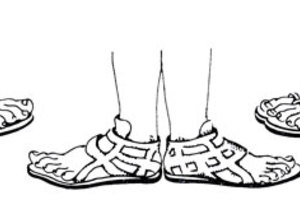 The most common shoe color was black, to a lesser extent red, yellow,and white. We cleaned our shoes with a sponge. It is known that shoes with soles made of felt and cork tree bark were worn exclusively by hetaerae. During the meal, the shoes were removed.

The price of shoes in ancient times can be roughly judged by the phrase of Aristophanes: "Eight drachmas for a pair of sandals is a lot of money!"

During excavations in the Athenian Agora, a dwelling of the 5th century BC was found, in which they found a lot of nails with wide caps and bone bushings for laces. A cilic found on the street near the dwelling with the inscription "σίμωνος "(Simone) suggests that the dwelling was the workshop of Simon, who, as Xenophon relates, was visited by Socrates. When Socrates talked to someone, Simon wrote down these conversations from memory.

A 6th-century BC amphora shows a customer stepping on a piece of leather on a workshop table to have his foot outlined and the sole cut out to fit. A kilik from the same era shows a master holding a crescent-shaped knife, while another knife and shoe struts hang on the workshop wall. 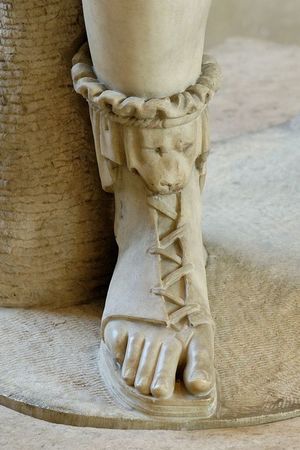 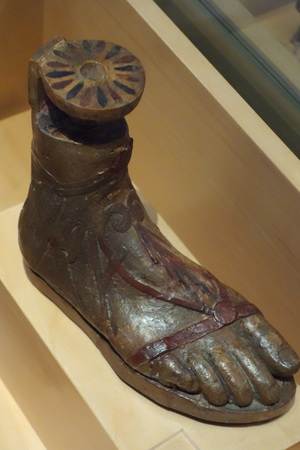 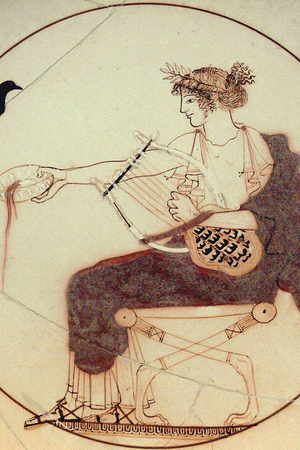 Apollonian. Painting of the bottom of Cilius from the burial site at Delphi. Delphic Archaeological Museum, Greece 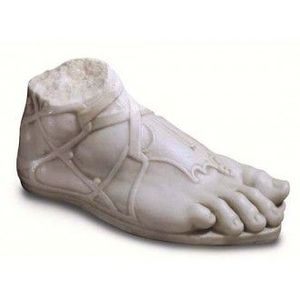 Fragment of a statue of Hermes, VI-I-th century BC, British Museum. 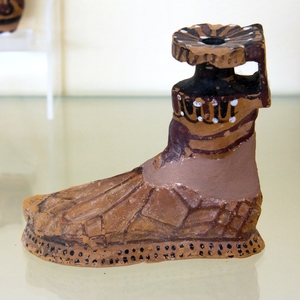 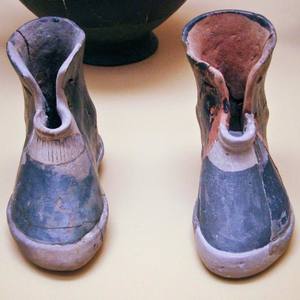 A pair of terracotta shoes from a female burial site, circa 900 BC, Athens Agora Museum. 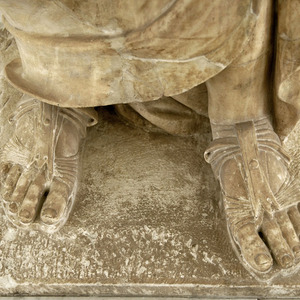 Portrait statue of Demetrius of Falersky (detail). Based on the original IV century BC National Archaeological Museum, Naples, Italy. 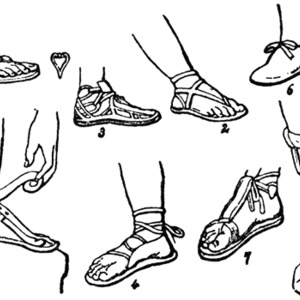 Greek shoes (from the book: Guhl E. K., Koner W. D. Das Leben der Griechen und Römern. B., 1893. Fig. 223): 1 (statue of Elpis in the Vatican), 2 and 3 (statue of Apollo Belvedere) – different types of sandals and their fastenings, from the simplest to the most complex; 4, 5 and 7 (statue of Demosthenes) – different types of shoes that partially cover the foot; 6 – fully closed shoe; 8 – an example of an endromid, or high hunting boots 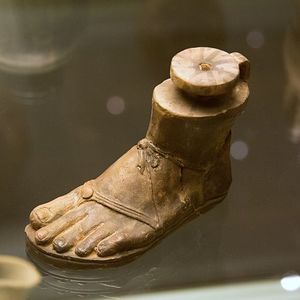