Legio X Fretensis (Tenth Straits Legion)- Roman legion formed by the emperor Octavian Augustus in 41 or 40 BC for a war with the youngest son of Gnaeus Pompey the Great, Sextus Pompey, who then controlled the Sicilian Island and was one of the leaders of the Pompeians.

Dates of existence: Created in 41/40 BC. The last mention of the legion dates back to 410. 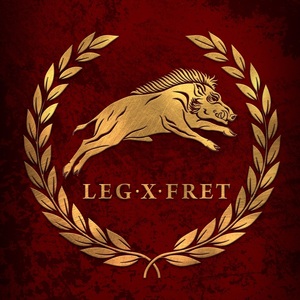 According to the book of Josephus, Elazar ben Yair, the leader of the defenders of Masada, gave a fiery speech to the Jews and urged them to die free men-to prefer death to painful and shameful slavery (excerpt of their speech by Elazar ben Yair, delivered on the night of the fall of Masada (Josephus, The Jewish War, VII, 320-336)):

"Take heart, heroes, cover yourself with glory! We have long ago decided not to submit to the Romans or to any other rulers, except God alone, for He alone is the true and just king over men. And now it is time to fulfill our vow. Let us not put ourselves to shame in this hour, for even before our soul abhorred the share of slavery, although then slavery did not threaten us with such monstrous dangers. Let us not even now voluntarily surrender ourselves to slavery, nor to the terrible torments that await us. We will not disgrace ourselves before the Romans, we will not surrender to them alive! We are the first to rise up against them, and the last to leave the battlefield. The Lord has shown us a great mercy by giving us the opportunity to die the death of heroes, to die as free men, which was not possible for our brothers who were captured suddenly. But we are open to what awaits us tomorrow, and given the right to choose the glorious death of heroes-along with those who are dear to us. May our wives not die disgraced, and may our orphans not experience the bitterness of slavery. And then we will do one another a last service, we will show one another a last favor, and what can be better and more precious, brothers, than the honorable shroud of freedom? But before we die, let us set our property and fortress on fire. I know for a fact that the Romans will be upset if they see that they didn't take us alive and were disappointed in their hopes of plundering us. Only our food supplies will be left untouched, so that after our death they will bear witness that we did not suffer from hunger or lack of water, but we ourselves chose death over slavery — as we had previously decided..."

In his description, Josephus refers to the story of two women who took refuge in a cave with five children and told the Romans how men killed their wives and children, and then by lot each other.

"...then ten people were chosen by lot, who were to kill the rest. And each of them sprawled on the ground beside his dead wife and children, his arms wrapped around their bodies, and willingly offered his throat to the ten who were performing this terrible duty. These people stabbed everyone with their swords without flinching, one by one. Then they cast lots among themselves, so that whoever fate pointed out would kill nine of their comrades, and then lay hands on himself.…So they all perished with the certainty that they had not left behind a single soul to be abused by the Romans. The next day the Romans went up to Masada, and when they found the dead heaps, they did not rejoice at the sight of their dead enemies, but only stood in silence, struck by the greatness of their spirit and the invincible contempt for death" (VII, 9: 1)."

The last of the 960 besieged set fire to the fortress and committed suicide. The legate of the legion during the siege of Massada was Lucius Flavius Silva Nonius Bassus. Also from the height of the Massada walls, you can still see the remains of the preserved outlines of Roman military camps around the fortress, built by legionnaires Legio X Fretensis. 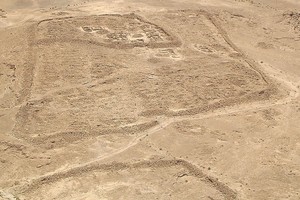 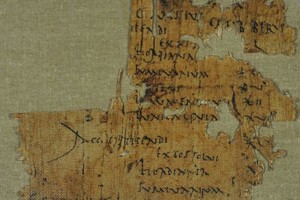 Massada, leaf soldier X Fretensis. Gaius Messius, son of Hesius, of Berytus, was one of the soldiers of the Legio X Fretensis who took part in the siege of Massada. Massada Museum. 72nd year A.D. 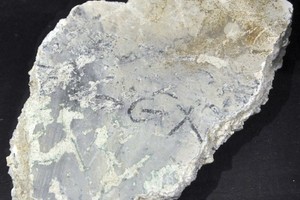 Masada, an inscription left by a soldier of the Legio X Fretensis in 74 AD. Museum in Massada. Israel

Interestingly, there is a version according to which Legio X Fretensis is the legendary Tenth Legion of Caesar. As a refutation of this version, the famous Australian writer Stephen Dando-Collins (Legions of Rome. Complete history of all the legions of the Roman Empire). The opposite version is held by the German historian of the XIX century Theodor Mommsen. 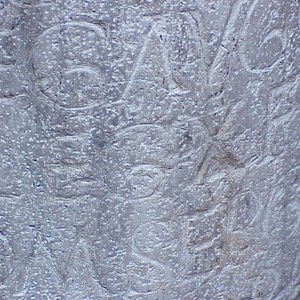 Stele in the old market of Jerusalem 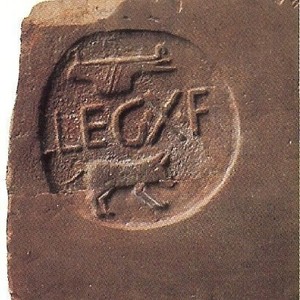 Tiles with the stamp of the Legion in Israel, 1-2 century AD. 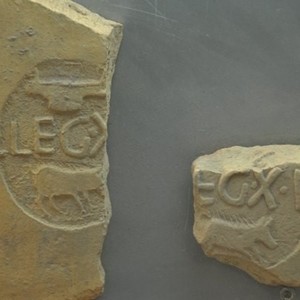 However, there are other clubs for the reconstruction of this division around the world, one of them is located in Malta. 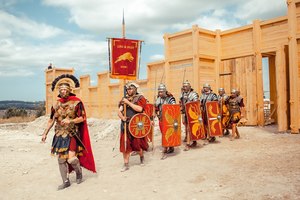 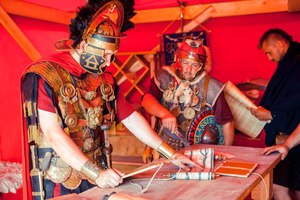 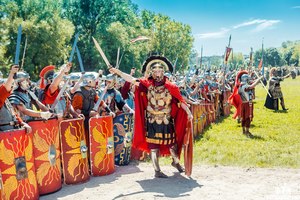 3. A. Makhlayuk. "The Roman legions. The most complete illustrated Encyclopedia (3rd Edition, revised and expanded)".

4. Grushevoy A. G. "Jews and Judaism in the history of the Roman Republic and the Roman Empire". 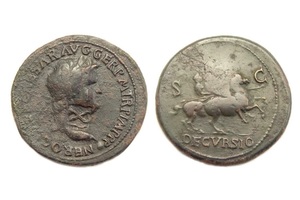 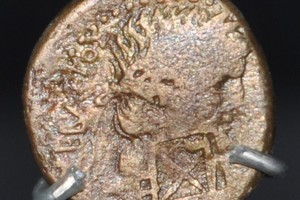 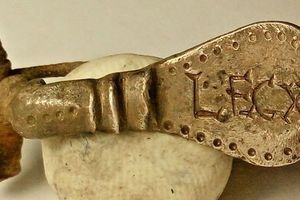 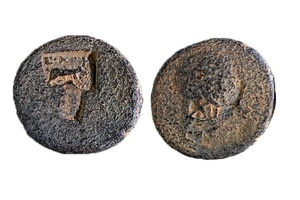 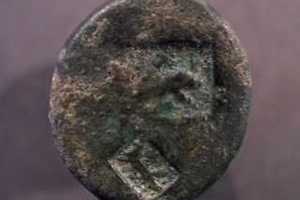 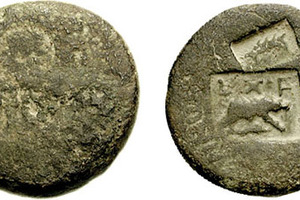 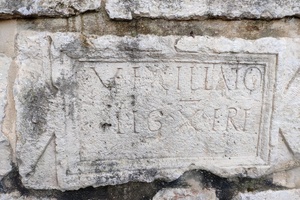 Tabula ansata vexillations of the Tenth Legion on the territory of a monastery in the Jerusalem suburb of Abu Ghosh. 1-2 century AD. 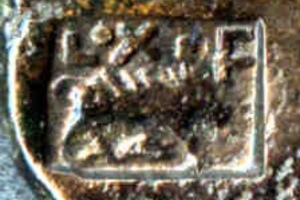 Fragment of the seal on the iron coin Legio X Fretensis. 1-2 century AD 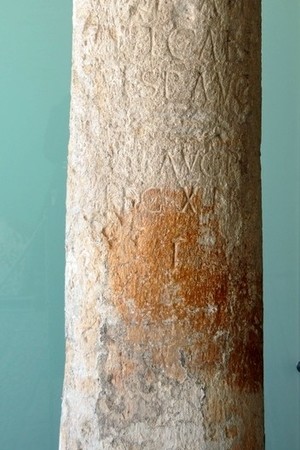 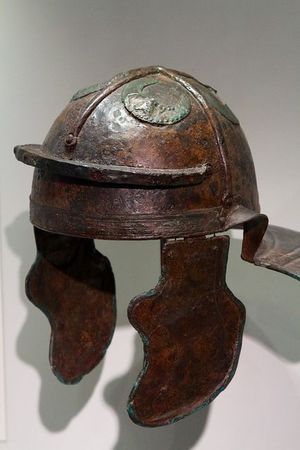 Helmet type Imperial Italian G (Imperial Italic G). Found in a cave near Hebron (Palestinian Authority, Israel). It is believed that it belonged to the legionnaire Legio X Fretensis. First half of the 2nd century AD 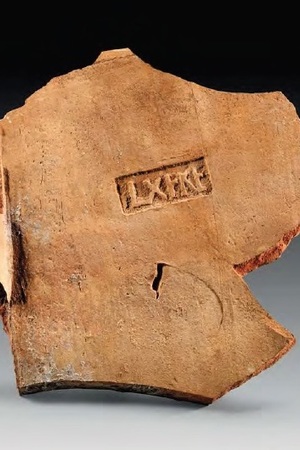