Lorica musculata (Latin: lorica musculata, literally - "muscular carapace") is a type of ancient Roman armor, similar to a cuirass, which has an anatomical structure usually consisting of 2 segments that are fastened together.

Early types of cuirasses and the progenitors of Roman republic-era musculature were made of bronze and consisted of hip-length breast and back plates connected by belts. Often this type of armor is referred to as a separate one - cardiophylax. The plates were engraved with the relief of a man's torso.

Other ancient peoples, such as Greece and the Celts, also had similar armor. In Greece, this type of armor was called the thorax, and it was largely under their influence that the lorica musculata appeared, with the image of the relief of the muscles of the chest, abs, and back. Later, when the muscles of ordinary legionnaires were replaced by Lorica Hamata and they became the armor of exclusively higher military ranks, the muscles began to be richly decorated with coinage. They also began to be worn on an equally richly decorated poddospeshnik- subarmalis, which also allows you to increase the protective properties of the armor. During the time of the Lorica Empire, the musculata had already finally become more of an element, more of an element of the ceremonial military uniform.

At the time of the republic, there were the greatest number of finds of musculata, and all of them were made of bronze alloys. 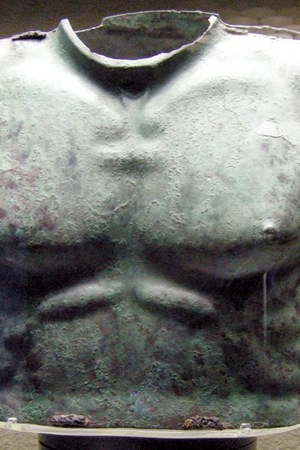 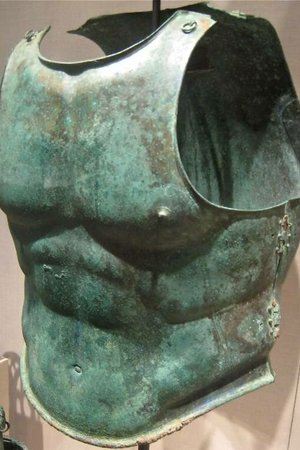 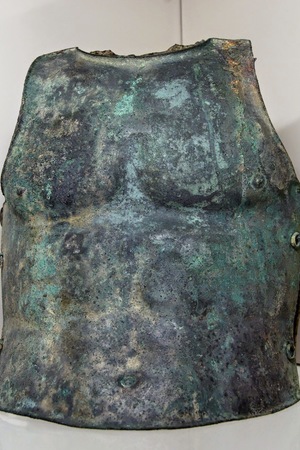 Among the most junior military ranks in the Roman army who retained the use of the loric musculata were centurions. It is interesting that they also began to wear them from the time of the Republic, and this tradition of wearing remained unchanged during the Empire. Unlike the legates and emperors, the musculata was not decorated with rich coinage, but faleras were worn over it . 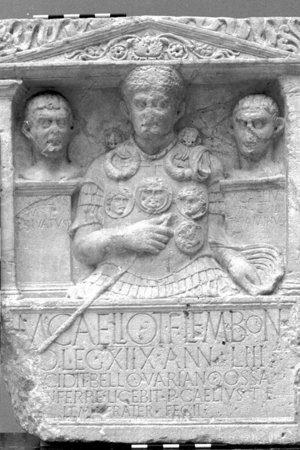 A centurion in muscle. It is kept in the Rheinisches Landesmuseum in Bonn. 1st century AD

The most ornate varieties of lorica musculata were naturally found in emperors and legates. The most common set of jewelry was the ears of Jupiter on the shoulder segments, the Gorgon Medusa in the upper part of the chest, and two griffins near the abdomen. These stories haven't changed much since the Republic. But there were other options, for example, images of gods, sphinxes, eagles. Also, a special fabric belt was often tied over the musculature . It was usually reserved primarily for legates. 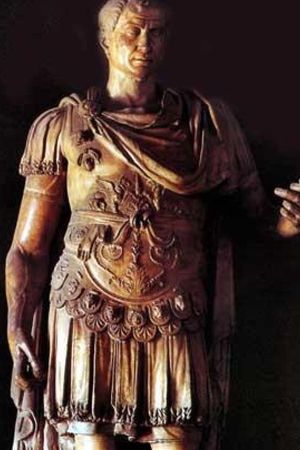 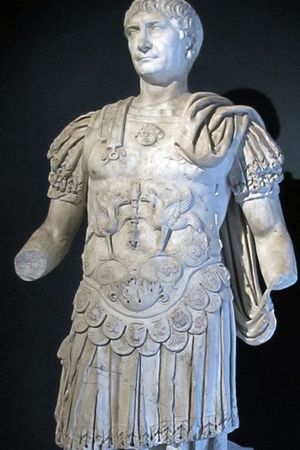 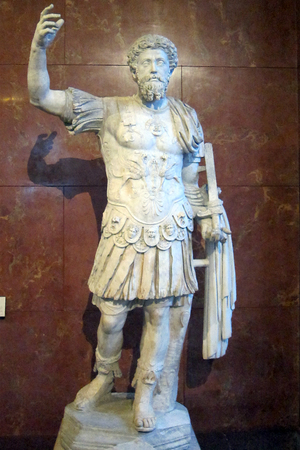 The most striking example of the preserved image of the Emperor in musculature is the two-meter statue of Augustus from Prima Porto. It was found in 1863 in the villa of the emperor's wife, Livia. Villa found near Rome on Flaminia road in the area of Prima Porta. In ancient times, the villa was called Ad Gallinas Albas. The statue is a copy of a Roman bronze original made by order of the Senate in 20 BC. Some historians believe that the statue has the best portrait resemblance to Augustus, although some facial features are considered idealized. The image shows the future emperor delivering a speech to ten thousand of his supporters in the Forum, calling on them to start a war with their political opponent Mark Antony. This speech later turned out to be unsuccessful, his listeners refused to fight with Caesar's loyal former colleague Antony. It also affected the fact that at that time Octavian was too young and did not have sufficient authority to declare war. The magnificent lorica of the emperor's musculat is decorated with images of allegorical figures-Earth and Sky, Sun and Moon, in the center - a Parthian warrior obediently returning the banners once captured from the Romans to the god Mars. The figure of Cupid on a dolphin at the feet of Augustus recalls the divine descent of the emperor's family from Venus and Aeneas, sung by Virgil. Made of marble, kept in the Chiaramonti Museums, Vatican City (inv. 2295). 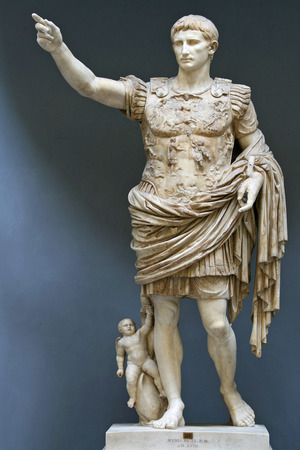 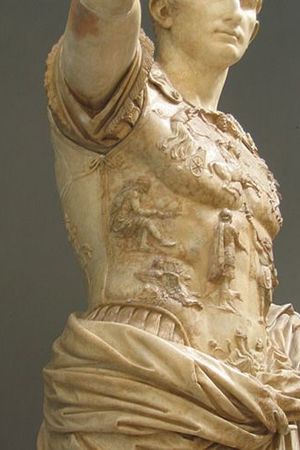 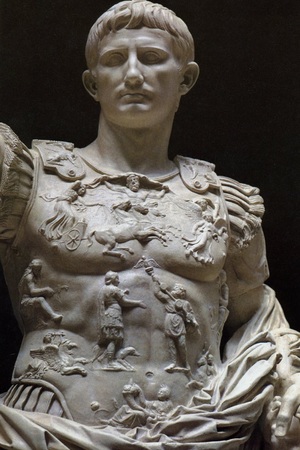 The double-leaf cuirass in Greece appears in the Bronze Age. It was widely used in the 8th – 6th centuries BC.e. Due to its high cost of production, the pantsir did not become a mass type of armor, due to competition regarding linen armor. At best, every 10th warrior could afford such an armor. Modern reconstructions of such armor weigh about 6 kg.

Craftsmen made a carapace out of bronze, beating a metal sheet on a stone form. The armor consisted of front and back flaps, fastened on the shoulders and sides with loops or belts inserted into the slots. The assembled carapace was barrel-shaped, schematically repeating the musculature of the male torso. Both flaps have cutouts for the warrior's throat, arms, and waist. The lower part of the carapace has a so-called bell-shaped shape due to the characteristic wide flangs. This form allowed the warrior to sit without removing the shell. The armor itself was short and protected the warrior's body only to the waist.

The decorative element was chased and engraved figures, which in the most luxurious and expensive copies formed whole compositions. Also often chased jewelry was anatomical in nature. 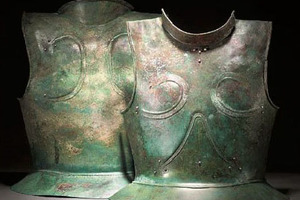 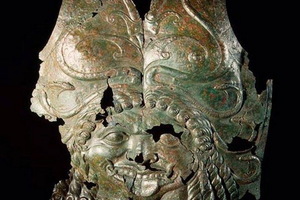 Greek bronze carapace, decorated with a relief with the image of a Gorgon. The Hermitage Museum, St. Petersburg, 6th-5th century BC

One of the most ancient analogues and progenitor of the lorica musculata can be considered Celtic cuirasses. They had completely different symbolic images and anatomy. The "press" was almost never depicted, but there were often Celtic traditional drawings. They were also made of bronze, and dated mainly to the 4th-6th century BC. 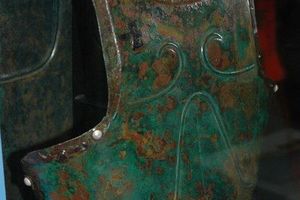 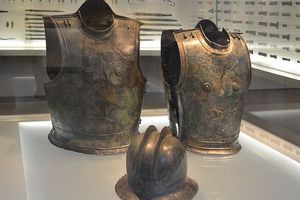 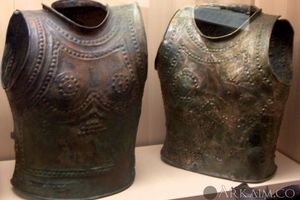 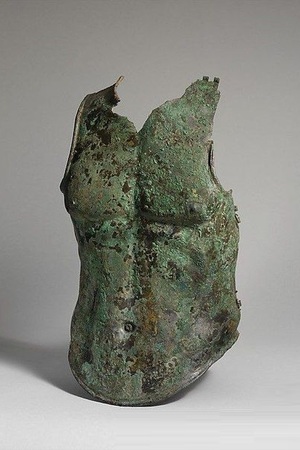 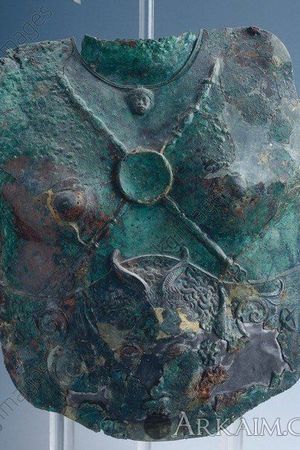 Obverse of the cuirass, bronze-silver, IV century BC Greece. 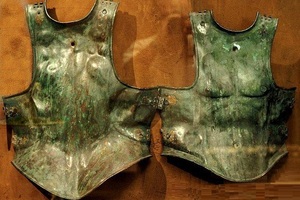 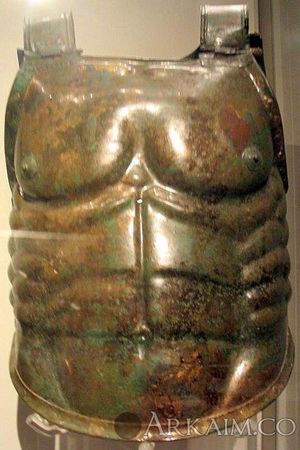 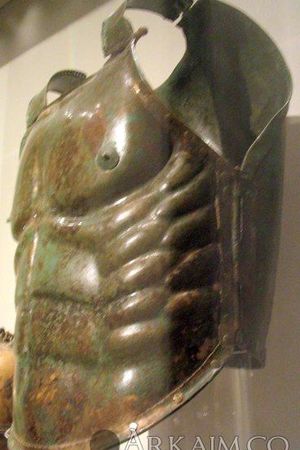 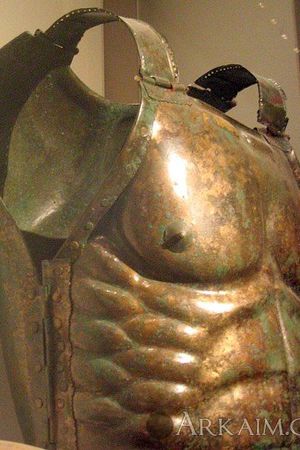 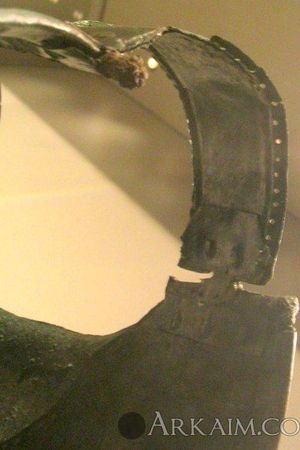 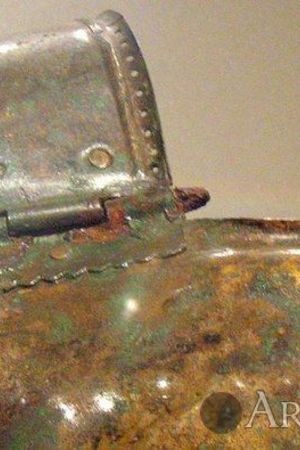